Funny how life’s best experiences are the impromptu ones. Combine that with Stumblers’ Luck and you have a recipe for a great time!

It was Mike Burn who suggested an off-season weekend in Cromer to explore part of the Norfolk Coast path, to a chorus of ‘heck, yeah!’ But as the date approached, we watched in horror the combined progress of the Beast from the East and Storm Emma from Portugal as they began dumping snow in industrial quantities all over Britain. But by good fortune Norfolk got away very lightly and, come the day, the roads to Cromer were perfectly driveable.

The second bit of Stumblers’ Luck was Mike finding an excellent B&B – the Cromer Beachcomber Guest House – which was not only a great place to stay, it was right on the coast path and just round the corner from a hotel with a very agreeable restaurant. So crab dinners all round on Friday evening.

Mad Dogs & Englishmen not only go out in the midday sun, they also go out in the freezing cold. The air temperature was consistently -1 or -2 degC, but the howling easterly wind from Siberia brought a windchill down to about -6 degC. It also played havoc with marine life, with news items showing lobsters being washed ashore in shoals. (But sadly, not where we were!)

Along the Norfolk Coast Path to Sheringham

On the Saturday, we headed west along the coast path towards Sheringham, crunching through the snow or flailing about helplessly on the deep shingle beach. Happily, the wind had eased considerably and we had a very enjoyable walk, pausing for a hot drink in a cosy cafe in Sheringham before carrying on to Weybourne. At about 8½ miles, this seemed like far enough, especially as the Ship Inn was open and conveniently opposite the bus stop for the Coasthopper back to Cromer.

Relaxing in the Ship Inn at Weybourne

That was until some smart alec suggested we walked back! So, true to form, three of us said ‘heck, yeah!’ (detect a pattern here?), finished their drinks and set off, abandoning the others to the pub’s snug warmth and good beer, and a lazy bus ride back. The plan was only foiled by finding the bus service had been cancelled due to the weather. But rather than heroically striding forth, these lightweights simply called a taxi! Well, the secret of success is knowing when to give in gracefully… 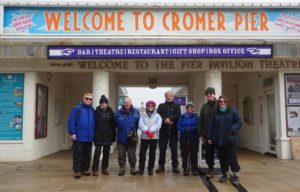 No ice-cream; no rock; no ‘kiss me quick’ hats. Perfect!

The weather was much improved on the Sunday, so we took a leisurely stroll eastwards towards Overstrand, taking in Cromer pier and its lifeboat station before following the coast path past the lighthouse. With the tide right out, we walked back along the beach, salvaging a surprising amount of plastic rubbish on the way. We hadn’t particularly expected to see any seals, so were concerned to see a lonely pup stranded high up on the beach. Happily, while we watched, the distressed creature was quickly rescued by volunteers from the Seal & Shore Watch, who stretchered it off to their rescue centre.

Paradoxically, visiting the Norfolk coast in winter can be surprisingly enjoyable. Not only is it much quieter, with no crowds and less traffic, but you can often get good low-season accommodation deals and the pubs and restaurants aren’t crowded. Perfect for some leisurely strolling and sight-seeing!

Big round of applause to Sarah & Mike for organising it all!