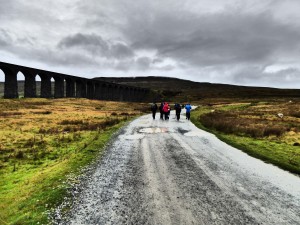 Heading towards Whernside, alongside the iconic Ribblehead viaduct

The Yorkshire Dales offer some of Britain’s finest walking, not least of which are the three peaks of Whernside, Ingleborough and Pen-y-Ghent. We’re not suggesting that you tackle the Yorkshire Three Peaks Challenge, but each of the three makes a cracking day out. Here’s our advice about enjoying them.

Whichever peak you tackle, you need to consider the weather. The Dales can have all four seasons in one day and, although they aren’t really mountains, the peaks are high enough to be cold on top and often lost in cloud. If in doubt, turn back and save them for a better day.

The highest and arguably the most appealing of the three, it has much visual interest and is easy to explore. 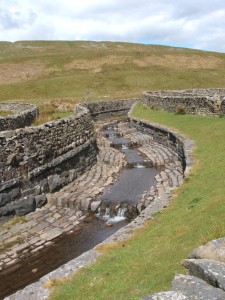 The picturesque aqueduct on the way up Whernside

There is limited roadside parking at grid 768 794 on the B6255 (which is widely regarded as the most scenic drive in the UK) so get there early. The map on Walk4Life shows the circular walk along well-maintained footpaths. Points of interest are:

On a clear day, linger at the triangulation pillar on the top of Whernside. The view can be breathtaking. And even better if you’re lucky enough to see a steam train crossing the Ribblehead viaduct far below you.

There are several walks around this area. We suggest a circular walk from Horton in Ribblesdale. See this map. 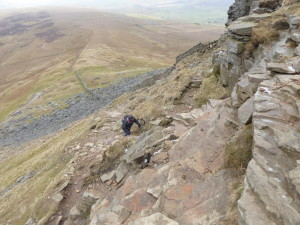 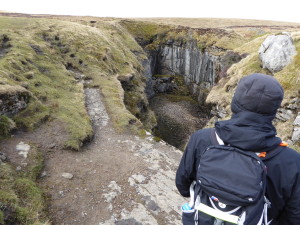 Hull Pot, just off the route back from Pen-y-Ghent

Park in the pay & display car park (2015: £4.50) Walk the route anticlockwise; there is an easy scramble up Pen-y-Ghent and a gentle descent along the Pennine Way back to Horton. On a fine summer day, you might like to continue along to Plover Hill and descend onto the Pennine Journey path to take you back to Horton.

Be sure to take a digression to see Hull Pot, an impressive collapsed cavern, possibly the biggest natural hole in Britain. Only accessible by abseiling, sadly.

On returning to Horton, be sure to patronise the excellent Pen-y-Ghent cafe. Usually busy with three-peakers, as this is the official start and end point.

Whichever way you tackle Ingleborough – and there are several – don’t attempt it in bad visibility unless you really can use a map & compass. Our preferred route is from Clapham. See this map. 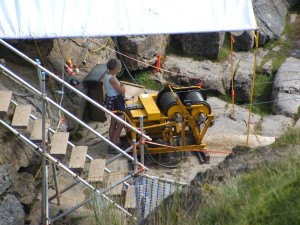 The Pothole Clubs’ winch, which lowers you down into Gaping Gill 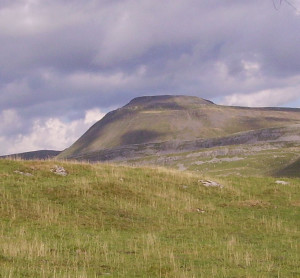 Ingleborough has a distinctive flat top

Park in the pay & display (2015: £4.50) and pay the modest charge for admission to the Ingleborough estate (2015: 65p). The trail passes Ingleborough Cave, a popular visitor attraction for the less energetic. Continue through Trow Gill and up past Gaping Gill to the top of Ingleborough. Take special care to take the correct track coming down off the flat top of Ingleborough; you need to be heading east, not north!

Ideal time for this trip is either the Spring or August Bank Holiday week, when the local caving clubs set up a winch over Gaping Gill so you can visit this vast subterranean cavern. But get there EARLY!
> Bradford Pothole Club  > Craven Pothole Club