Well, we promised ourselves a return fixture after last year’s visit to the Yorkshire Dales and we weren’t disappointed.

The forecast could hardly have been better, so we agreed to tackle Ingleborough from Clapham. A solid but rewarding trek, with a photo opportunity at every corner. And athough the high pressure and lack of wind stopped the fog from clearing properly, Stumblers’ Luck ensured that we had half an hour of sunshine for our rest break on top of the peak.

Special mention to Sarah, who found it tough going but refused to give up and came back with a real sense of achievement.

Double celebrations at dinner then, as we toasted Mike & Chris’s 40th anniversary.

Sunday saw us splitting up to do our own things. The more energetic of us completed our round of the three peaks by romping up Pen-y-Ghent, while those still recovering from Saturday’s exertions did some gentle sightseeing at Fountains and Middleham.

Now the problem is where to go next year! 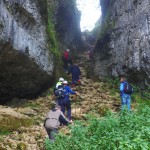 Heading up through Trow Gill en route to Ingleborough 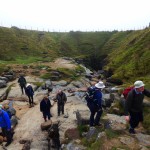 A clear day on Ingleborough! But not for long… 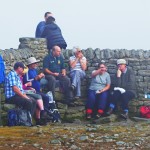 Recovering from the long climb up onto Ingleborough 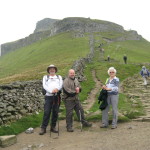 Pictures by John B and Mike F