Having enjoyed some cracking weekends in the UK, October 2016 was time to look further afield; somewhere off the beaten track but still easy to get to. And so we discovered Asturias, a stunningly beautiful province in northern Spain, unspoiled by tourism despite being only a short, inexpensive flight from Stansted.

Some research and Stumblers’ Luck led us quickly to an ideal solution: an enterprising English couple running a B&B (El Casa Ingles) in a small mountain village, who were able to set up accommodation for 14 Stumblers. And they knew all the local walks around the area!

The village, Soto de Agues, nestles in a river valley in the Redes Natural Park. It is popular with Spanish visitors, who come to enjoy the Ruta del Alba, a 14km walk alongside the Rio Alba rising from lush riverside pastures through an increasingly dramatic tree-lined gorge between sheer limestone cliffs. It is deservedly regarded as one of the finest walks in Asturias.

Careful planning, and invaluable advice from our local contacts, Rachel and Leon, identified three outstanding walks. The first, a short afternoon climb through bosky woodland, took us to Ladines, a picturesque village of mediaeval buildings with a spectacular view across to the Sierra del Crespón. Fortunately the village bar was closed or we might be there still!

The previous few days had seen cloud obscuring the peaks of the surrounding mountains but a clear blue sky on Saturday was perfect for a climb up onto the Sierra del Crespón. The walk took us past farmers’ stone huts, and goats being guarded against wolves by dogs, along a buried water pipeline where a steel cable bolted to the rock provided a reassuring handrail, leading to breathtaking views down to Rioseco and its reservoir.

On the Sunday we walked the Ruta del Alba in the company of numerous Spanish families enjoying an outing in the sun. A much more gentle affair but equally as entrancing an experience.

Despite the area’s popularity it remains beautifully unspoiled; this is the real Spain, utterly unlike the tourist hell of the south. A group of British visitors was an unusual event and caused some interest among the locals! Asturians are genuinely friendly and welcoming, but you do need to speak Spanish to get the most out of a visit.

And so many vivid and lasting impressions. The characteristic Asturian architecture; three days of excellent regional food in huge quantities; fresh spring water at the roadside; the little old lady still wearing the traditional Asturian clogs or madreñas; the brown puppy who followed us all the way to Ladines and then somebody else right along the Ruta del Alba; Asturian cider drinking, which has to be seen to be believed. And the elderly Spanish gentleman selling his hand-carved walking staves for charity and who spoke perfect English, having lived in the UK for many years.

If you’re tempted by the prospect of walking in the real Spain, why not contact our hosts? According to the time of year, they can offer B&B or self-catering in a picturesque house on the Rio Alba. Stumblers Recommended! 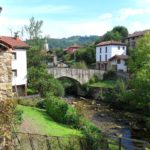 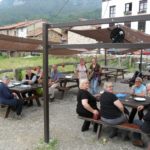 Stumblers in the bar at Soto 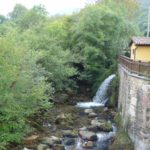 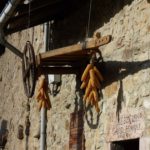 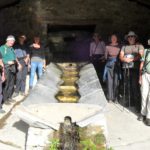 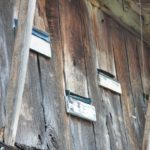 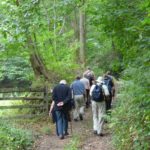 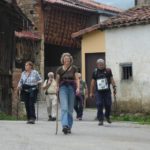 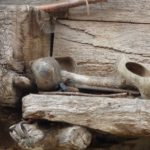 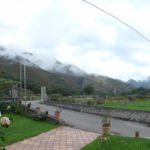 A view of the Sierra del Crespon 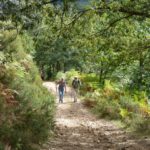 Walking up to the Sierra del Crespon 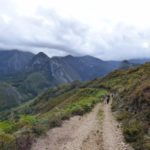 On the Sierra del Crespon 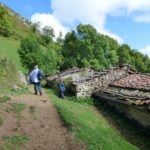 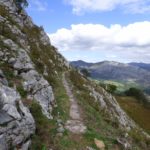 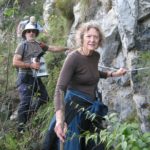 The handrail on the Sierra del Crespon 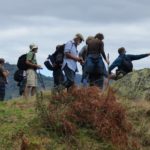 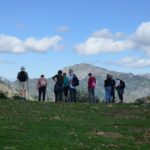 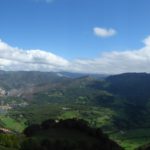 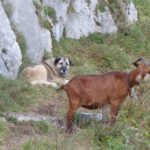 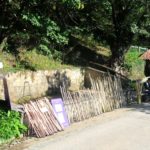 Walking staves for sale for charity 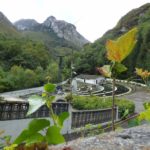 Piscifactoria on the Rio Alba 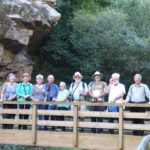 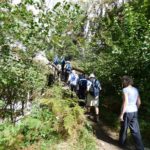 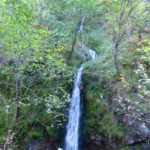 A waterfall on the Ruta del Alba 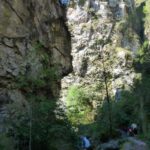 The gorge of the Ruta del Alba 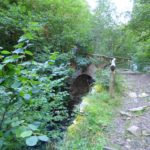 A bridge on the Ruta del Alba 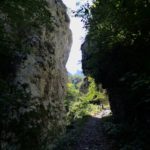 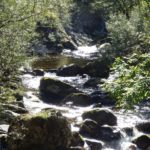 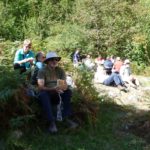 A picnic stop on the Ruta del Alba 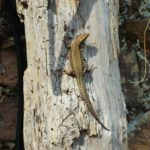